ARE WE STILL DOING THIS ?

So to add fuel to the fire of an already decimated sports world in 2020 a list of top states who have called for a boycott because of players taking a knee and protesting silently has come to a head again. So you mean to tell me the EPL (Soccer League) can rock the BLM patches and name on the back of their jerseys for the season, take a unified knee for the unjust murder of black people not just in the US but around the world, and you rednecks still have a problem with players, (BTW the league is 78% black men) if you didn't notice. Other Euro leagues take a moment of silence for those murdered but you still want to boycott the season? I have a news flash for you....aint gonna happen. There maybe 50% sponsors in the stands, KAP will find a team, CAM plays for the Pat's now, and some of you are just going to have to live with it....oh as you cheer for your favorite black man to run and catch the ball right? Its never a problem unless Black Men in the country (2020) have a voice for themselves and speak up about how they feel. Get used to it racists, or watch NASCAR...of Guess you can't watch that now either. Listed are the top 10 states who have called for that Boyoctt. Maybe they should put more energy into motivational programs or education. I coul;d've guested at least 8 of these , how bout you? You know the same ones who fought to keeep human beings ensalved and voted for a man who released a video of a man screaming "white power" This is where we are now

And here's Sports Insider's map depicting which US states boast the most and least boycott activity on Twitter: 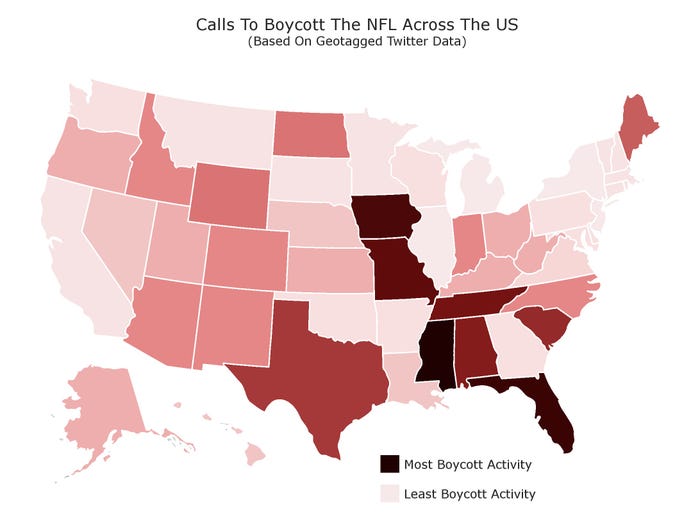